NOTE: For the best gameplay experience, play with headphones. Also, avoid the web build if possible. :)

Resist and Persist is a game about holding onto planets, but also knowing when to give them up. With aliens attacking your planets, and with civilians trying to escape, you’re not going to be able to hold on to everything you’ve got. But having no planets is better than having them captured. So sometimes, you have to turn the guns on your own, and sacrifice all you’ve fought for.

Aliens have come to destroy your planets! Your civilians need to evacuate, and they're putting their trust in you to buy them time. How long can you hold off the invaders to let your citizens escape?

Controls: WASD or the arrow keys to move your ship.

Left Click to fire your guns and destroy the aliens!

Right click on planets to sacrifice them (blow them up) to prevent aliens from taking them over! Note: Planets can only be sacrificed when their shields are completely reduced.

To try to get the highest score possible! Points can be gained by:

Civilians can only be evacuated between enemy waves.

You can lose points by:

-Having a Planet Invaded

Speeders: These tiny cruisers are fast and furious, but their shields are very weak. Don’t let their blasters tear you apart!

Carriers: Big ships with lots of shields. They spawn speeders and fire big bullets that tear your planets apart.

Bombers: Small, slow ships with big guns. They will target your turrets, so be careful! (Image of bomber)

Landers: These slow ships neutralize your planets when they lose their shields. Don’t let them capture your worlds or face a massive point reduction.

Turrets: Like your turrets, but bad. Also you can’t destroy them. Enough said.

That's about all there is to it-- remember, don't let the aliens get ahold of any of your planets. 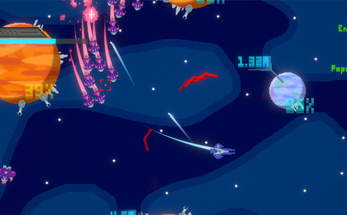